The Pee Wee B team entered the State Championship tournament with high hopes and a single goal in mind.  Playing in the first game of the tournament we faced for some, the team that has ended previous seasons with disappointment, Fox Valley.  For some players, Fox Valley who had beaten us in 2 previous championship games, revenge was on their mind.  We opened the tournament with dominant play and taking a season’s worth of learning, completed the tournament’s first game with a 4-0 victory.  With step one completed the boys could now look forward to the semi-finals full of confidence and swagger.

Game 2 in the late afternoon saw the Ice go against our hotel hall neighbors, DC Everest.  The boys showed they were a team to be reckoned with, dominating from start to finish winning 8-1.  The only goal allowed came immediately off the face-off coming out of the intermission, an invaluable lesson (more on this later) that was learned for the championship game.  To celebrate our berth in the championship game the team decided a night of bowling was in order, what happened next told the story of this year’s team.  Upon arriving at Badge Bowl we headed to the back area with enough seating for all travelling with the team and saw the band setting up, time to party with CherryPie!  The boys went up to the stage during sound check and rocked out with the band as our meal arrived.  Spirits were high and this was a night to remember for all as our last tournament night of this special season.

With the partying done, the boys settled down and focused on the championship game on hand Sunday morning.  As expected we were facing the Wildcats of Waunakee, unsure of what to expect other than their top game.  As the boys began their pre-game workout, a special motivator was brought into the locker room unbeknownst to them.  As the boys got dressed the last State Championship trophy won by WCYHA was brought out, ironically 5 years to the day the trophy was won.  With the trophy as motivation the boys were fired up and (for at least WCYHA families on hand) an instant classic was born.

As play began it was obvious we were in for a game, as both teams controlled and moved the puck as championship caliber teams do.  About a third of the way through the first, WCYHA got on the board and lead 1-0.  With the game officials letting the boys play there was some great physical hockey from both sides but half way through the first, Waunakee snuck one in to tie the game 1-1.  Play continued hard and fast to the end of the first.  The second period was much of the same top notch hockey as both teams battled hard.  Each team had their scoring chances but at the end of two it was still tied 1-1.  Off to the intermission for both teams to put together their game plans for the final period.

The boys knew what was ahead of them and what it would take to bring home the championship, and unlike our last game, came out of the intermission with fire in their hearts and ice in their veins.  WCYHA controlled most of the play in the third allowing the Wildcats few opportunities in our zone but were unable to break the 1-1 draw.  As the time dwindled down it was apparent to all in attendance that the next goal would win this game.

As was the case throughout the third, the puck was down in Waunakee’s zone and with 3:24 remaining a low shot on net provided the rebound the coaches have been talking about all year and with stick on ice and knees bent, the eventual winner was scored.  Ice 2, Wildcats 1.  With Waunakee’s talent, this game was not yet over and with 2:00 remaining a face-off in our zone forced the Wildcat’s to pull the goalie for the extra attacker.  With the instructions given, the Ice players followed and with 1:04 remaining, an outlet pass from the Waunakee zone was intercepted and dumped from the blue line, dead center to the back of the net, Ice 3, Wildcats 1.  Off the final face-off of the game, the puck was again back deep in the Waunakee zone and just to make sure the comeback was DOA, again an outlet pass was intercepted and with .5 seconds the final goal of this magical season hit the twine, final score WCYHA Ice 4, Waunakee Wildcats 1.

Congratulations to the boys of Pee Wee B on your 2016 Wisconsin 2B State Championship, WCYHA's first Division 2 State title. 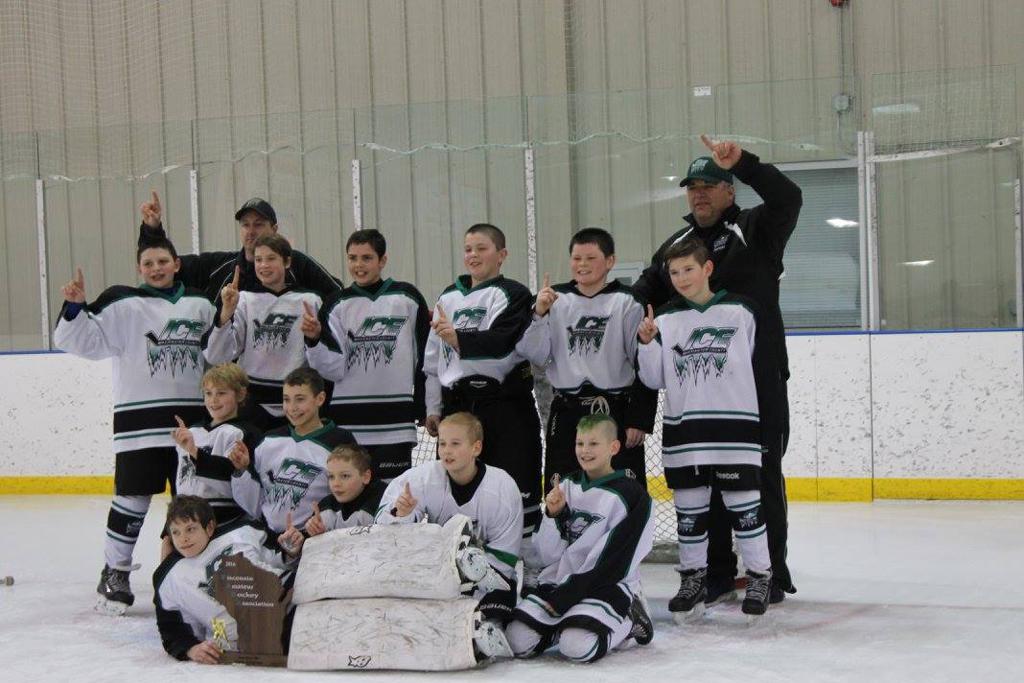