The Ice opened the tournament Saturday Morning against the Waunakee Wildcats (Yellow). In a closely contested game, the Ice struck first just over 2 minutes into the opening period when Alex “Petey” Petersen found the back of the net (assisted by Kayla Carmichael). Six minutes later Tyler “Frankie” Bartz extended the Ice lead with the assist from Matthew Ferrier. The second period had both teams trading opportunities, but neither team could get the puck past the goaltenders. With just over 3 minutes left in the third period, Waunakee struck, narrowing the Ice lead to 2-1. The Wildcats then pulled their goalie for the extra attacker, but their final push was stopped by 2 empty net goals, the first from Chris Petersen (assist to Carson Phillips) and then Quinn Daczka (assisted by Talon Vorphal). Final score 4-1 Ice.

The first semifinal game matched up the Ice with fellow Region 5 opponent Elmbrook. It was a fast pace game with each team having their chances in the opening frame. The Ice struck first late in the first period with Talon Vorphal’s goal (assisted by Carson Phillips). As with the 1st game, teams traded chances in the second period, but the score remained 1-0 Ice. Then at the 6 minute mark of the 3rd period, Elmbrook was able to tie the game at 1-1. The horn sounded at the end of the 3rd period with the game still tied – we were on to overtime! The extra period brought some exciting end-to-end action and ended at the 3 minute mark when Matthew Ferrier carried the puck up the ice and pounded in his own rebound to give the Ice the 2-1 victory.

That brought the Ice to the Championship game against the Region 6 representative, the Onalaska Tornado. The determination and desire of both teams was evident from the opening faceoff. While the Ice pressured and battle hard, the Tornado struck first with two second half goals to take the opening period 2-0. The second period had Maura Farrell standing tall in net (17 shots faced) as the Ice battled back into the game. Alex Petersen struck 3 minutes into the period with a power play tally. Then with 2:49 remaining in the period, Talon Vorphal scored for the Ice to tie the game at 2-2 (Alex Petersen with the assist). The third period was much like the first – both teams skated and battled hard, but it was the Tornado that scored twice. Final score 4-2 Onalaska. 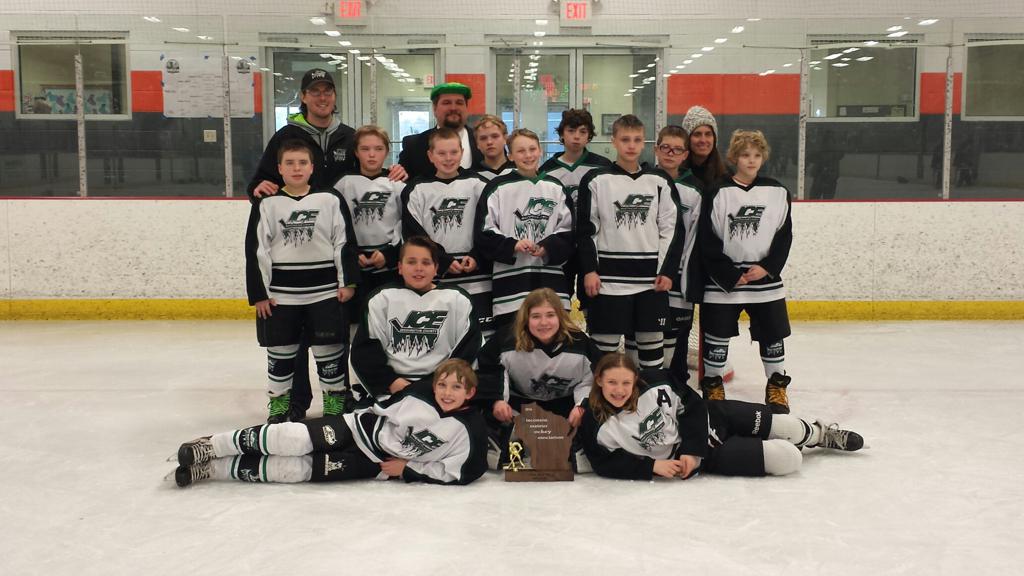