Over the weekend of Dec 11-13 the Pee Wee B team travelled to Sun Praire for the Cardinal Cup tournament.  The boys opened up tournament play on Saturday against the Madison Patriots.  They jumped on the Patriots early, scoring on the first shift of the game.  As the boys started to take what has been learned in practice into game situations, the ice started leaning towards the Patriots end of the rink.  At the end of two periods they were up 7-1 and finished with a decisive 10-1 victory.  There were two Hat-trick patches awarded for this game.

After a great bonding afternoon at Poolie's the team returned to the rink to take on the Crystal Lakes YellowJackets.  For about half of the players on the team, this was a chance to exact revenge from a gut-wrenching loss the previous year, affectionately known as the "puck flip" game.  Playing on the same ice surface and defending the same net, the boys would not let history repeat itself and again jumped out to an early lead. Once again with solid play in all facets of the game, this one was almost over before it started ending 9-1 with Crystal Lakes scoring their only goal late in the game with the outcome already determined. This game featured great offensive zone play, puck possession, defensive and goaltending play.  There was another Hat-trick patch earned that evening.  With our demons excised, it was on to the championship game to face Green Bay in a rematch of a game one month ago.

The boys spirits were high, outshooting our opponents 81-24 in two games.  They were ready and determined to give Green Bay a better game than previously in our barn.  The boys did not disappoint.  The game was hard fought with the Ice taking a lead midway through the second.  Green Bay did not give up and tied the game up and then took the lead.  Our boys were also not ready to give up and fought back to tie the game up with just under 5 minutes to go.  After three entertaining and hard fought periods, this game was headed to overtime.  The play went back and forth with opportunities for both teams to end it.  Solid goaltending on both ends kept this game going, but unfortunately with just under a minute to go, Green Bay scored to end it.

While we left Sun Prairie with spirits low, the Pee Wee B boys fought hard all weekend and deserve accolades from everyone for an excellent showing of talent and gamesmanship on behalf of WCYHA. 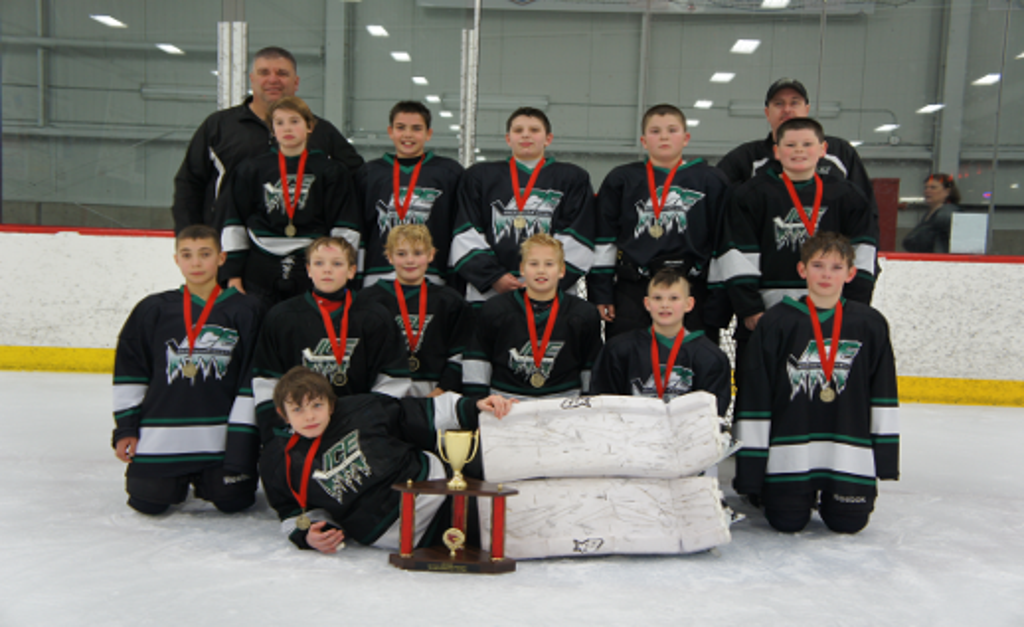